St. James Catholic High School Theatre Presents: I Remember It Like It Was Yesterday 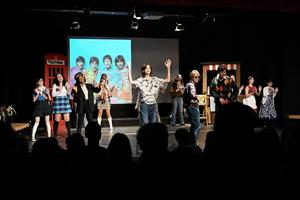 The St. James Catholic High School successfully presented their first production since before the COVID-19 pandemic.

I Remember It Like It Was Yesterday shared a captivating, and delightfully musical, rendition of the experience and stories of the strangers who gathered together on the streets of London on January 30, 1969, to watch The Beatles’ now iconic surprise performance on the rooftop of the Apple Building.

Attendees will enjoy hearing many of the 20th century’s #1 band’s hits including All You Need is Love, Penny Lane and Yellow Submarine to name a few.

Being their first production back since 2019, students from all grades auditioned to be a part of the musical.

“I was thrilled in December to get the green light to hold auditions for this year’s production,” shared Nancy Sanvido, drama teacher at St. James and director of the play. “It has been a long two years of not being able to celebrate the talented students at our school.”

“People should come and support the Arts community at St. James,” said Sanvido. “These students have been working for 5 months on this show. People are always pleasantly surprised to see who is on my stage as many people never see their students and children in this capacity.”

The play runs until May 19 where they will play their final performance at 7 p.m. The show is open to the public for a cost of $5 at the door.